If you are considering growing some runner plants somewhere around your garden or home. Look no further, it’s time to add one of the runner plants today to bring some immediate foliage with a very speedy growth rate. In the post, we’ve summed up the 14 Different Runner Plant Types To Grow Indoors And Outdoors that will make your home or garden feel even lusher in no time. In the list, some are flowers, others are herbs or houseplants. Check them out! 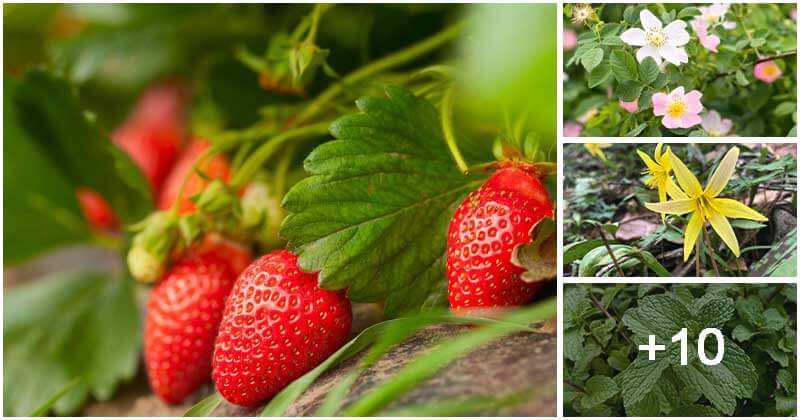 These types of plants are often called runner plants, also known as stolon plants which reproduce asexually. A large stem, stolon, or runner grows out of the mother plant horizontally and produces a baby plant at its tip. This plantlet will grow around the mother plant by eventually growing its roots. The new plant photosynthesizes for new growth and potential new runner generation to grow in your garden. To learn more about their characteristics and their growth patterns, keep reading our helpful guide below. Wild roses are sprawling stolons that spread widely. They tend to grow best without care and will sprout runners from every available node. Strawberries are also considered an edible ground cover. A strawberry’s stolons are almost always horizontal. These stems run alongside the earth and pop out new strawberry plants in intervals along this stem.

#3 Lily of the Valley Lily of the valley is another runner or stolon plant. It is extremely poisonous and can infect other plants due to its stolonic nature of spreading. If ingested, this flower can kill plants and children and cause illness in adults. Spider plants spread their stolons or runners down to the ground below them, their runners will droop long and spaced far apart. The crocosmia flower is a beautiful orange flower that closely resembles the lily. It is a hardy plant but still prone to breakage, however, it deals with its breakages by sprouting horizontal runners to continue growing. Trout Lily is named after their leaves which look like the skin of a mottled trout fish, these runner plants are edible and offer medicinal value. Purple Queen is one of the easiest plants to propagate. They quickly form new branches and run across its soil to root. Philodendrons are runner plants that spread quickly to any ground and soil. They are easy to care for and thrive in high humidity and low light situations in your bathroom, bedroom, and living room. Peppermint spread so quickly as their root system can grow 5 inches per month, which make peppermint as an invasive plant species. Ginger is a stolon that grows both fake stems and branches made from the base of rolled leaves. Its horizontal root systems allow the ginger to propagate itself in colonies. Bermuda Grass can form a good even spread coverage because of its ability to send out runners quickly. It has a very intricate rhizome and stolon that can also grow horizontally and vertically. Sprawling Ivy is considered an evergreen perennial that climbs, trails, and stretches vigorously. Its stolons form horizontally and vertically, and their vertical branches bloom small green and yellow flowers. Irises flowers self-propagates by sprouting vertical growths from their nodes or breakages. The blooms attract wildlife such as hummingbirds, bees, and butterflies. The plant spread themselves across the garden in modest patches. Potatoes are a runner plant because they grow on the vine. They will spread horizontally and vertically due to their vine abilities. Potatoes can be ground coverage plants that take over an entire garden or go up trellises.

10 Herbs to Grow Near Tomato Plants

15 Popular Bushes With Pink Flowers To Grow In Yard