The wax begonias are the most common container and landscape plants that many people know and love growing. However, there are more than one, even at least 10000 species of this plant that not all people know the interesting thing. And in the article, we’ve listed the best beautiful 16 Different Varieties Of Begonias You Can Grow as well as will certainly help in narrowing your choice on the type of begonia that should make it in your landscape. 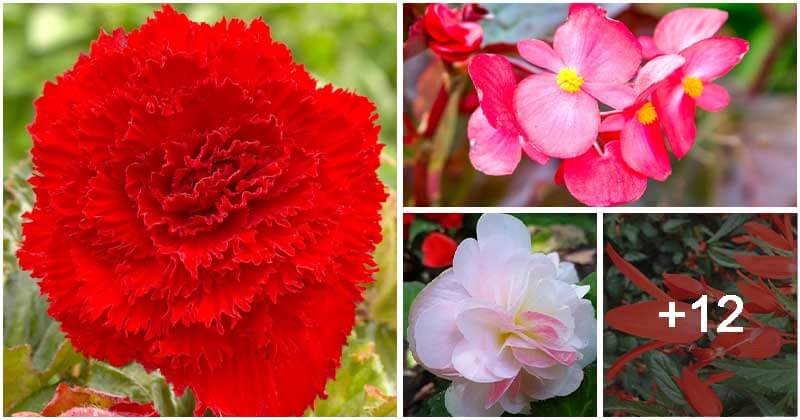 These flowers bring natural beauty both indoors and outdoors anywhere they are planted. So, whether you grow them in any spots around your home, they will liven up your living space better than ever. Not just that display charming and bright flowers but are also these begonias laden with meanings and symbols like all other flowers and plants, which convey love, compassion, open-mindedness, and growth. So, if you love their beauties and secrets, growing some surely give you great different excitement. Tuberous Begonias have large, showy, neon-colored flowers that bloom from mid-summer to fall. They fare well both indoors and outdoors. The flowers of Double Begonias look like roses. They are bushy, compact, and they feature large, double flowers of white, orange, pink, and red. Hardy Begonias just have flowers in white and pink colors. They are the hardiest types of begonias, hence the name. Flowering Begonias have showy flowers. They prefer cool temperatures, so they grow well indoors. They do not last long, and they require more meticulous care tips. Non-stop Begonias continually bloom, small two-toned flowers all summer and up to early fall. Their colors range from bright yellow, rose pink, orange and white with splashes of pink. Multiflora Begonias displays clusters of flowers droop down from one stalk. They come in yellow, pink, scarlet, salmon, and apricot colors. Fimbriata Begonias have sturdy, fleshy stems, and fringed, drooping petals of peach, pink, and white colors. They have a dark green, serrated foliage that is also drooping in nature. Rex Begonias have the showiest foliage of all species. Their flowers, however, are small and insignificant. They are usually planted as houseplants. Interspecific Begonias have large flowers and bloom many. The color of their blooms comes in red, pink, and white blooming from mid-spring to early winter. Double Picotee Begonias are two-toned begonias, with double flowers that look like roses. Bolivian Begonias show off small flowers that have a pendulous growth habit and their stems are dangling. Their natural colors are red and orange but hybrids now sport pink, yellow, and two-tone flowers. Angel Wing Begonias have bamboo-like stems. They have their spotted leaves and clusters of flowers. Dragon Wings Begonia produces tiny flowers that come in white, red, and pink colors and bloom profusely and continuously from spring to fall. The stems are thin but fleshy plus the foliage is oval and lancing, glossy, finely serrated, and with a pink outline. Rhizomatous Begonias have fleshy roots and stems that creep along the soil’s surface.

10 Best Houseplants That Can Reduce Your Respiratory Problems

20 Beautiful Flowers for a Cottage Garden

18 Self-Seeding Flowers, Herbs and Veggies That You Just Need To Grow Once

17 Easy-to-grow Vegetables For Your Balcony

17 Plants That You Can Grow In Acidic Soil Garden

8 Great Natural Pesticides You Can Apply To The Garden

Popular Citrus Tree Diseases and Ways To Control Them

11 Uses Of Detergent For Your Garden